Crossbow differs in ranges from 280fps to 400fps which means they can cover a distance of 280 feet per second and 400 feet per second respectively. It is hard to estimate which speed is perfect for crossbow hunting and which is not. Despite speed estimation, we must know which bolt is effective to penetrate inside the animal. Modern crossbows have sufficient speed to kill animals such as deer. But when you are exploring the crossbow for deer hunting you must have the maximum knowledge in this regard. While purchasing the crossbows we can see that companies are keenly interested in crossbow speeds and with advancements in other fields, the speed of crossbows has also gained great importance in this regard.

So we can say that the speed of the crossbow means a lot to us without ignoring the other parameters for successful hunting.

Speed and energy in crossbows:

It is crucial to tell how much speed and energy is required for a crossbow to hit on a particular target. Today, every field requires the fastest speed no matter it is the internet, airplanes, cell phone services, and many more. So, it seems not surprising that manufacturers are struggling for crossbow speed and intrigue to enhance it day by day.

Companies are producing the fastest bow arrow combinations that push the bolt to the maximum speed ever. The speed with plenty of energy can be able to penetrate the crossbow bolt deep inside the body of an organism. 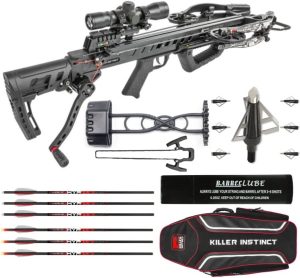 Why the crossbow speed is so important:

A better chance of making a good shot is enhanced with greater speed which can be gained through a flatter trajectory. If the trajectory is flatter then more chances the bolt has to hit the target position.

For example, Using repeatable, visible techniques rather than computations or computer simulations, the research and development engineering team at TenPoint gathered new data over roughly a six-year period. To compare various arrow weights, the same bow zeroed at 20 yards was used for each test. At 50 yards, a 370-grain arrow will fall about 20 inches lower than a 545-grain arrow, which will fall 30 inches lower.

It was said by Jake Miller from the TenPoints marketing department that the most important part of this exercise was to see the difference between the dropping of the arrow at different places. A crossbow is no more different than a compound bow that can shoot roughly at the speed of 380 fps.

So the question arises here how you can be familiar with your crossbow’s trajectory and speed?

For this purpose, you have to practice at those yardages in which you are sure that you can encounter your hunt. After this slightly stretch this from 10 to 30 yards.  Make sure to target your broadheads at the place where they can collide with your field points at the same impact point. Your broadheads may not strike the same target just though they are the same weight as your field points. After achieving your zero using field points, you must attach your bolts with broadheads and make any necessary final adjustments. Fps of a crossbow has great importance in targeting the vital part of the animal. People usually question the significance of crossbow FPS:

The deer’s have very sensitive senses that can detect the sound of bolt shooting so if your bolt takes more time to reach the target then it will be problematic for you as deer can run very fast.

Most shooters realize that at 60 yards, the difference between 330 and 400 feet per second is less significant —it takes approximately the time it takes to blink twice. Naturally, if the distance between the point of shooting and the target is lesser then there will be a minimum effect of speed there. But as you increase the yards of the crossbow, shooting speed will get much more important. People usually estimate that lightweight and compact dimensions are more crucial than blazing speed, so choose the bow you LIKE. Speed is only one factor.

For the purposes of this study, crossbows with velocities of more than 380 fps will be examined. Although crossbows with speeds between 350 and 375 fps are thought to be fast,  we only consider the advantages of the fastest of the fast.

At which speed you can hunt with a crossbow:

As mentioned above, hunters use the speed 400fps and 500 fps bolt so that they can achieve the target.

You do not need to spend costs on advanced models of crossbows as all of them work almost similarly. But you must consider the speed in this regard.

Besides your mastery in crossbow hunting, the accuracy of the target also depends upon the animal’s movement. If we consider deer, it usually runs n jumping form. So your bolt has the speed that it must hit the target before changing its one position to other.

Usually, what happens if your crossbow has a speed between 300 and 500? You have better chances to hit the target. Meanwhile having a speed blow than 300 fps you still have chances to shoot the target in case of hunting deer but at minimum. Moreover, it is quite difficult for you to target the vital part of deer such as its heart.

Here the question arises can you upgrade your 280fps crossbow to 400 fps?

The answer is yes you can. Hunters are not in the financial condition of purchasing new crossbows. So upgrading the previous one is a much better option in this regard. As there is plenty of difference in shooting with 280 fps and 400 fps.

For example, while hunting the deer suppose you are shooting with 400 fps or 500 fps. More chances you have to kill the deer.

The two reasons behind it are

“How far does a deer run after a shot?

After a shot with a crossbow, if you fail to hit the vital organ or the crossbow bolt fails to penetrate deep inside (usually occurs in case of 300 or 280 fps). Then there are some chances that deer can escape but they cannot go far away. Maximum after a crossbow shot a deer can run up to a distance of 100 yards and the running speed can be slow after a bolt shot. A deer with an abdomen injury with a bolt will stop after 50 yards. Once it stops, it will take rest for 2 to 3 minutes.

How often you should repair your crossbow:

Without repairing your crossbow it must lose its velocity. You must repair its string or it will be better for you to change the crossbow string after one year. Moreover, you must oil the nuts of your crossbow frequently so that it will never freeze or get any kind of rust on it.

People usually practice every day for hunting but still miss the shots at the spot. Because they forgot that besides speed there are also some factors that one must consider

And that can dramatically increase or decrease your performance that is the wind pressure. Most probably such climate factors affect the target when it is at maximum range. And the animal got sufficient time to run. Everyone knows the reason behind such missed shots but in the hustle, during hunting, we often forget it.

So the wind and other natural climate factors can drastically change the trajectory of a crossbow.

Factors that affect the crossbow fps:

Let’s explore them one by one

Does the temperature affect the speed of the crossbow? To determine let’s test the bolt at both temperatures.

Try to hit the target in cold weather and then after try to hit the target in hot weather. Then keenly observe the distance between these hitting. Above a certain temperature, there is no significant difference between the cold weather shot and the hot weather shot. But when the temperature falls from 10 degrees. Then we can examine that the crossbow bolt decreases its speed from 10 to 15 fps. Which can be effective while shooting deer or another animal.

Another major factor in this regard is wind. Heavy wind can dramatically slows down the speed of the crossbow if it is coming from the opposite direction. But the question is how much an arrow can lose its speed in windy weather. The best method to estimate is to hunt with a crossbow in a windy area.

Crosswind can reduce the fps of the bolt by approximately 20 fps. Which is sufficient for the hunt to escape. Although, it is interesting to know that if both the arrow and the wind have the same direction then the negligible difference is calculated. I experienced it within 45 yards. There is no significant decrease in the speed of the bolt.

It is crucial to hunt on a rainy day. But you can’t avoid it as a rainy day gives you more fun than a sunny day. I am also a rain lover so I got a perfect time to enjoy the pouring drips as well as to experience the effect of the crossbow on this weather.

Surprisingly I experienced no significant change in speed while there was a slight dripping. But in a heavy rainstorm, I faced a certain change in the fps of the bolt. But still, with a little care, I was able to shoot the deer.

I can clearly see the difference between shooting the bolt on clear ground and in a forest full of twigs and trees. Minor touch of any object with a bolt can drastically increase its speed. It is difficult to avoid the bushes and twigs in forests as they are everywhere in the forest.

All crossbows are not good for hunting. A bolt must gain a sufficient amount of kinetic energy after releasing from the crossbow. To hit the target forcefully we are not recommending 170 or 250 fps. As these crossbows can hit the target within a range of 10 yards. To target the animal beyond it you must use 300 fps or more. For instance, elk hunters stick to 300 fps but it is not useful while shooting a white deer. For better understanding, you must study the efficiency of the different crossbows to hit the target after that buy the most preferred one.

Concluding the above discussion we can say that the fps (feet per second) speed of a crossbow is very significant while hunting. Less the fps speed more chances to lose the target. Moreover, certain elements affect the fps of the bolt which you must know. Although the crossbow is the most adventurous hunting weapon there must have some limitations that one should consider. Before starting crossbow hunting must collect information regarding it.