Both crossbows and archery bows have been used since Greek times. These primitive hunting weapons have great importance as well as flaws over each other. It is a little bit confusing whether you should use a crossbow or a traditional bow for hunting adventures. Both bows have their pros and cons but we can compare them with each other in different categories. These features include speed, accuracy, safety, maintenance, expenditures, and many more. In this blog, we will examine both crossbow and conventional bow and select which has a better reputation.

Normally we termed traditional bows (recurve, longbow) and compound bows as vertical bows. As their limbs are in the vertical direction while equipping them, meanwhile crossbows are known as horizontal bows as their working face is in the horizontal direction. However, we normally do not use the term “horizontal bow” for the crossbow. 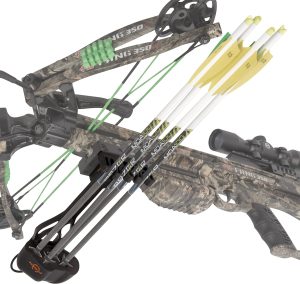 These bows are simple than crossbows. Unlike crossbows, they do not require any essential equipment such as an arrow rest, tree stand, or something else. The only maintenance we need to do is the maintenance of the bowstring. That is the reason that such bows are more reliable and less costly.

However, the traditional bows are not that much powerful. But the advanced category of these bows, the compound bows are much more efficient in this regard. They have sufficient strength due to additional equipment added to them. Although, the long bow and curve bows are somehow difficult to utilize and hard to understand after complete practice archers usually enjoy this adventurous experience of shooting.

It is the most effective regarding speed, accuracy, and strength. They have enough capability to hit animals such as deer. As they have a sequence of special pulleys and Strings to give more strength as compared to long and recurve bows. But unlike the traditional bows, these require proper maintenance and some additional accessories.

Compound bows are much more expensive than other bows due to their advancement and accessories. However, without buying a compound bow you are allowed to purchase accessories such as an arrow rest, sight and stabilizer, etc.

The recurve and compound bows are much more advanced and easy to use as compared to longbows. People usually use them in competitions and hunting. They are more reliable and efficient than longbows

The old primitive longbows were long usually 6ft more than the height of a normal man. That is the reason that these were limited for usage as short people face very difficulty in tackling these bows.

To make them manufacturer dries the wood for almost a year and after the minimum changes, the bow maker transits the wood log into a bow. The bowstring is usually made up of flex, silk, or hemp. Arrows are usually two feet long with a shaft on their tips. 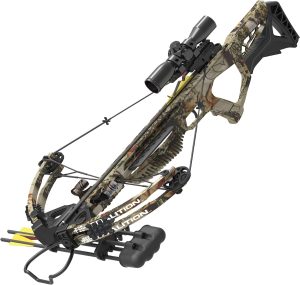 However, the crossbow is the most advanced hunting weapon usually uses for hunting. It has a proper mechanism of quiver, pulley, arrow, and string. It includes a trigger mechanism so that you can press the trigger to release the arrow. Nevertheless, the crossbow arrow does not term it as an arrow, we usually call it a BOLT.

The weapon is used for various purposes such as hunting, on the battlefield, and many more. However, it has increased its advancement and effectiveness in the field of hunting.

These have also many ranges in price moving from low to high cost and simple to advance in efficiency and accuracy. Unlike, traditional and compound bows it is not that difficult to use moreover, disabled people can also operate it.

People with minimum upper body strength and less power to draw back the string can use it easily.

Regulations for crossbows vary more than those for vertical bows. While other states only permit them for older or disabled hunters, other state wildlife agencies allow all bow hunters to use them. Crossbows are lawful in some places only during particular times of the year or on certain types of property, whereas in others there is no distinction between crossbows and vertical bows when it comes to legal firearms. To make sure you can check the laws in your state.

More Post: Using Bleats And Antlers May Just Give You A Shot

In the beginning, the crossbow was made by craftsmen using wood more specifically olive wood. With the passage of time and advancement in the field of weapons, ancient people made the crossbow with steel lath.

Nowadays, the crossbow has a length of 18 inches having a width of approximately 2 feet. It is very interesting to know that the string of crossbows contains the material animal sinew and hemp which is most popular in making it. The bolts of the crossbow are significantly smaller than longer, recurve, and compound bows.

We mainly compare the compound bow with the crossbow in this article.

At a distance of 50 yards, the crossbow bolt makes a distinction of merely four inches low from the actual track meanwhile the compound bow gives plenty of difference it dropped to almost 40 inches low.

More difference occurs when the arrow covers a length of 100 yards, the compound bow distracts about 120 inches meanwhile the crossbow drops down up to only 60 inches ( half inches from the compound bow).

It is significant to determine the speed and kinetic energy of the crossbows and compound bows. Hunters not only aim to hit faster but accuracy took the same importance here as your goal is not to injure or suffer the animal but to kill it on the spot.

We use a common term for both crossbow and compound which is fps which declares how many feet an arrow or bolt can cover if you release it with a certain speed.

If we compare both the crossbows and compound bows we found a noteworthy difference between them. A crossbow contains a speed of 400 FPS. Whereas, the compound bow arrow with a weight of 350 grains can give a speed of 350 FPS. Even the most inexpensive compound bow can give a velocity of a mere 370 to 390 FPS. That’s why we recommend the crossbow for hunting as it gives you the maximum kinetic energy so that the target has minimum chances to be aliverelatepiercing the arrow.

To describe the yard an arrow or bolt can cover, the word range is not sufficient we must consider the effective range which is the range within which an arrow hits the target without distracting from its target position.

For example, the Average speed of a compound bow is 100 to 120 yards but this is not enough. The effective yard for the bow is very minimum limited to 20 or 30 yards Meanwhile, for the crossbow the range is vast. It can cover several hundred yards.

A reasonable difference occurs between these two bows (crossbow and compound bow).  However, the distance of yards can be flexible for a beginner and a master. As an expert archer can hit the target up to 80 yards accurately.

It is hard to know which bow has more power of accuracy and which can aim more effectively. It is debatable and still doubted because both the crossbows and traditional bows have pons as well as cons.

The crossbow is effective in aiming the target as to cock the bolt is much easier with a little draw. Also, it contains the additional efficiency of scope so that the chances of missed shots lessen dramatically.

However, the compound bow increases the rate of missed shots as drawing back the string is much more difficult. Drawing the string increases the chances of fatigue and inaccuracy. However, being lighter in weight makes the shot effective somehow.

The details mentioned above clear that the accuracy in shooting is unable to define appropriately as both have advantages and disadvantages.

Which one is portable?

The comfort to carry the crossbow and compound bow mainly depends on the method of hunting. If you hunt by stalking or walking throughout your adventure then it is hard for you to carry the weight of a crossbow as it is heavier and you are forced to hold it in your hand. But if you have to hunt merely by sitting in a specific place then you need not worry.

However, the compound bow can be hung around your shoulder and has less weight. So that you can even run while taking it along with you.

To hunt the animal, it is the basic requirement that the animal should not aware of your presence. As animals such as deer are faster that it is hard to even watch them while running.

If your weapon makes extreme noise, it will become difficult for you to hunt. In this regard, the crossbows are not much effective due to their extra equipment they produce much bluster that is sufficient for an animal to be aware of the presence of a hunter.

On the other hand, the compound bow makes the minimum voice so that it is uncomplicated to target the animal without exposing your presence.

The advancement brings more expenditures with itself. If you compare the advanced crossbow with the advanced compound bow you will face a difference of almost 1000$. Which is a fine charge. The crossbow due to its advanced features contains more worth.

Despite knowing the attributes. Let’s explore the benefits of both.

No need for cocking:

A unique device to cock the arrow is not required for loading or cocking the arrow. Just stretch the bowstring and your arrow will be cocked.

Having a pulley and more strings than one with other special accessories requires less effort to load the arrow.

Unlike traditional bows, the crossbow takes less time to reload. With minimum experience, you can do a faster load while hunting.

Being lighter in weight it is quite easy to handle and carry along with you while walking or running. Does not require any particular stand to tackle it. You can stalk the animal while handling it.

The compound bows are significantly less expensive than the crossbows. Having a certain decrease in price makes it economical.

Easy to carry and less effort required to use the crossbow. No need to stretch the bowstring or stress your shoulder. That’s why we recommend the crossbow over compound or traditional bows.

Again you can fire easily by pressing a trigger just like in guns. Unlike, others crossbow demands nothing like drawing back of string and holding the arrows, etc.

The crossbow always remains cocked. That is the reason the argument most of the time goes in favor of the crossbow.

People having some disability in shoulder or chest muscle, fracture in arms or hand muscles can also operate them. The adventure is not limited to an appropriate, fit person.

When deciding between a crossbow and a compound bow, you should first examine the curve. Crossbows are a better choice than compound bows if you want a weapon that is simple to use and do not want to have a steep learning curve.

Conversely, you should get compound bows if you value their lightweight and silent operation. Nevertheless, both bows are excellent options. But before getting one, you simply need to think about your needs and priorities. However, when one considers the opposite side of the coin, it is extremely simple to notice the similarities between the two. They both fire arrows, and for the majority of users, their effective range is 40 yards or fewer.